The SJW and equality movement

New
#261
K9! said:
Wow. Sadly, the Ivy League Schools started all this woke nonsense, and they have the money to keep going without government funding.
Click to expand...
It's true the Ivy League schools could survive without government grants and tax breaks but I'm not sure they would try to because they would have to reduce their spending dramatically or they would eventually spend away all of their endowments. Currently the value of government grants and tax breaks is more than their endowments' investments earn. The Ivy League schools get a lot of prestige from their government funded research, ego and greed might outweigh ideology in their calculations. If you consider the hypocrisy (intolerance and racism) of the SJW movement, it is clear that their stated ideology is not what is really motivating them.


Between 1985 and 2008, Harvard University's endowment generated 15.23% returns, while Yale pulled in 16.62%.​
...​
Endowments strive to meet two chief objectives. First and foremost, they attempt to generate high enough real returns to cover their yearly withdrawals, without dipping into their principals. Secondly, colleges aim to preserve the real value of their principals, which actually entails augmenting principal amounts, in an effort to combat inflation. In fact, endowments heavily rely on their own inflation measurement metric known as the Higher Education Price Index (HEPI), which factors the prices of goods and services specific to higher education expenses. It is generally believed that the HEPI exceeds the consumer price index for all urban consumers, by 1%.​
​
https://www.thedp.com/article/2017/04/ivy-league-tax-report


The Ivy League’s total endowment is around $120 billion,​
...​
Because Ivy League schools are nonprofit institutions, they don’t pay taxes on any investment gains their endowments might make — which saves them a lot of money. Between the 2011 and 2015 fiscal years, the Ivies received a $9.6 billion tax break on the $27.3 billion growth of their collective endowments.​
...​
Between 2010 and 2015, the eight schools received $23.89 billion in federal grants​

The ivy league is getting about 16% return from their endowments but the amount they get from the federal government is grants and tax subsidies amounts to about 24% of their endowments.
Last edited: Jul 10, 2020

Member
#262
K9! said:
Wow. Sadly, the Ivy League Schools started all this woke nonsense, and they have the money to keep going without government funding.
Click to expand...
The same schools to which Trump continues to send his kids. I wonder if he's going to have Barron just learn a trade?

New
#263
Silence said:
The same schools to which Trump continues to send his kids. I wonder if he's going to have Barron just learn a trade?
Click to expand...
I'm sure his kids know better than to fall for the woke crap. They seem like individuals to me.

New
#264
The little mermaid is now a racist fish. 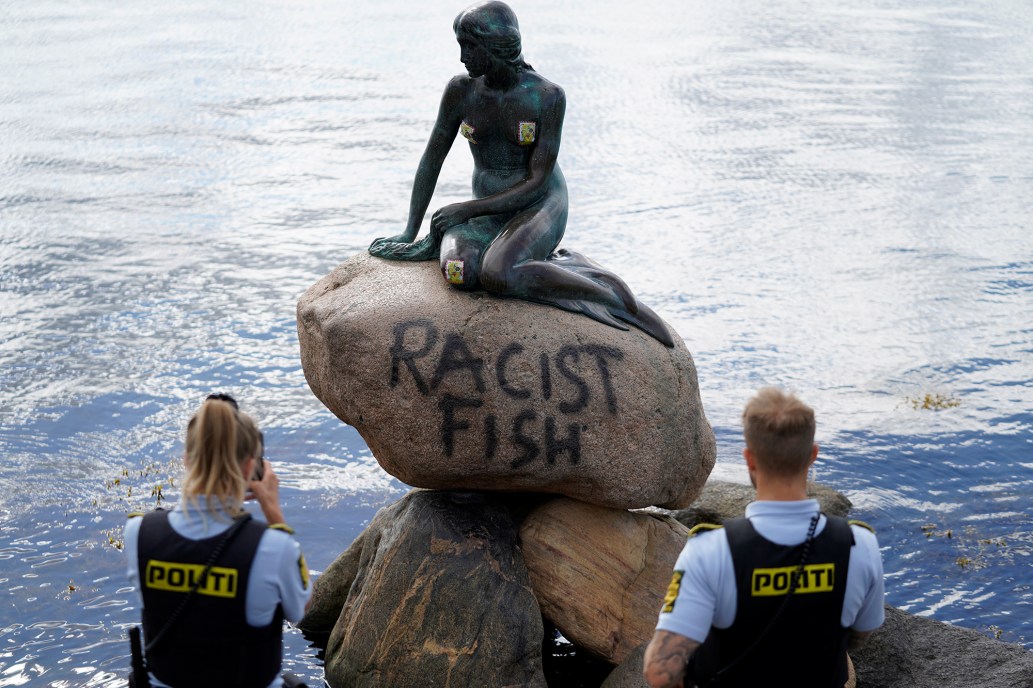 From Hitler to present-day national socialists with YouTube cooking channels, the far right's anti-meat ideology runs surprisingly deep.
Click to expand...
Unless you are Black. Then it's OK.

Many would say veganism also belongs on this list. That’s what I used to think, the assumption being abandoning all animal products and byproducts is an extra, bizarre, and inaccessible pursuit for most of us. I’ve seen so many vegans—white people, of course—that left me with the impression that veganism is merely a diet indulged by those with disposable income. They further turned me off by trying to compare nonhuman animal oppression with chattel slavery, and by trying to shame meat consumption with graphic images of animal suffering.

But what if there’s more to veganism than that?
Click to expand...
This stuff is really funny, but also sad because some people follow this crazy cult mentality.

Member
#267
K9! said:
I'm sure his kids know better than to fall for the woke crap. They seem like individuals to me.
Click to expand...
Compelling response.

New
#268
Silence said:
Compelling response.
Click to expand...
Well "individuality" is something not tolerated by collectivist SJW/Marxist cult members. Just look at the training given to employees of Seattle.

New
#269
The left wants the number one rated cable news show silenced. It's all about censorship with the left.


No wonder Don Lemon doesn't read the "secret message board" racist statements, because some of those statements could have been taken from Vox or the Washington Post.

I guess posting anonymously on forums is now racist.

EDIT: Oh look! the guy who doxed and cancelled the Fox News writer is racist too!

Nigerian Americans, meanwhile, are one of the most educated groups in America, as one Rice University survey indicates. Though they make up less than 1 percent of the black population in America, nearly 25 percent of the black student body at Harvard Business School in 2013 consisted of Nigerians. In post-bachelor education, 61 percent of Nigerian Americans over the age of 25 hold a graduate degree compared to only 32 percent for the US-born population.
Click to expand...
These facts challenge the prevailing progressive notion that America’s institutions are built to universally favor whites and “oppress” minorities or blacks. On the whole, whatever “systemic racism” exists appears to be incredibly ineffectual, or even nonexistent, given the multitude of groups who consistently eclipse whites.
Click to expand...

It is deeply unfortunate that this pseudo-intellectual body of ideas was allowed to grow unchallenged in our universities. In a way it is quite analogous to the whole problem of science going sour - there simply isn't enough care to weed out the junk in academic thought.

New
#272
A woman was murdered for saying "All lives matter".

New
#273
Harry Potter has been cancelled.

New
#276
malf said:
https://www.npr.org/2020/07/12/8900...arlson-as-top-writer-quits-over-bigoted-posts
Click to expand...
That was already addressed. It really just comes down to you calling everyone you disagree with a racist. There was nothing in any of that that showed anyone was a "white supremacist". A young guy made a mistake and paid a high price for it.

Even the guy who doxed and outed the writer is apparently a "racist".

Member
#278
K9! said:
https://nypost.com/2020/07/11/the-f...medium=site+buttons&utm_campaign=site+buttons
Click to expand...
I'm sure many of those South African Americans outperforming whites are actually white.

Member
#279
I don’t know if I’ve posted about this here in this thread yet, forgive me if i do. But we always hear about these “wage gaps.” And (In 2020) they’re mostly in accurate. Asian Americans actually make more money than white folk. Immigrants from many areas of the world also perform just as well as whites. College educated and married black couples perform just as well as college educated and married white folk. When people point towards the wage gaps they just consider that all things are equal the study in terms of production of each group. But this is a seriously superficial view of the data. For instance, there was this popular study somewhat recently which showed that male physicians made a little more than female physicians. What nobody seemed to notice is that male physicians were working more hours on average and were in generally better paying fields of specialisation. And when you account for this, the discrepancy entirely disappears. But don’t tell that to SJWs, because it doesn’t fit their narrative. I also feel that deep down they’d be disappointed to learn that the pay is equal.

This same holds true regarding the black community. People like to point out the wage differences without accounting for anything else. The reasons why blacks make less in this county is because they are dropping out of high school at a much higher rate, they’re being locked up at a much higher rate, and they’re having children while unmarried at a much faster rate. I short,
There’s a culture problem. The Asians (despite also being marginalized throughout American history) make more money than white people. Know why? Superior cultural values regarding education and hard work. That’s what’s great about this country. Work your ass off and do what’s right and you’ll do well irregardless of skin color. Racism is on its way out. Younger folk are less and less racist as time goes. We don’t fix the problems in the black communities by running around and trying to find people who are using the N word and cancelling them. We have to (THEY HAVE TO) fix these cultural problems.

New
#280
dpdownsouth said:
I'm sure many of those South African Americans outperforming whites are actually white.
Click to expand...
It suggests a group of immigrants are doing better than people born in the US, suggesting a cultural difference. You basically have one mixed race group outperforming white Americans.
You must log in or register to reply here.
Share: Facebook Twitter Reddit Pinterest Tumblr WhatsApp Email Link
Top