Member
#5,461
Silence said:
I guess you may have to define "good" before you can be satisfied. I haven't double fact checked these, but you can check them out if you want:

It didn't rain on his inauguration
Trump began his presidency by lying about the weather. It rained during Trump's inaugural address. Then, at a celebratory ball later that day, Trump told the crowd that the rain "just never came" until he finished talking and went inside, at which point "it poured." This was the first lie of Trump's presidency. Like his lies that same week about his inauguration crowd, it hinted at what would come next. The President would say things that we could see with our own eyes were not true. And he would often do this brazen lying for no apparent strategic reason.

Trump was once named Michigan's Man of the Year
Trump has never lived in Michigan. Why would he have been named Michigan's Man of the Year years before his presidency? He wouldn't have been. He wasn't. And yet this lie he appeared to have invented in the final week of his 2016 campaign became a staple of his 2020 campaign, repeated at Michigan rally after rally. It's so illustrative because it makes so little sense.

Trump won the election
Trump's long White House campaign against verifiable reality has culminated with his lie that he is the true winner of the 2020 presidential election he clearly, certifiably and fairly lost. To many of us, it's ludicrous nonsense. But to millions of deluded Americans, it's the truth. And it has now gotten people killed. The nation's truth problem, clearly, isn't just a Trump problem. With this last blizzard of deception and the Capitol insurrection it fomented, Trump has shown us, once more, just how detached from reality much of his political base has become -- or always was.

Entire books have also been written on the topic: 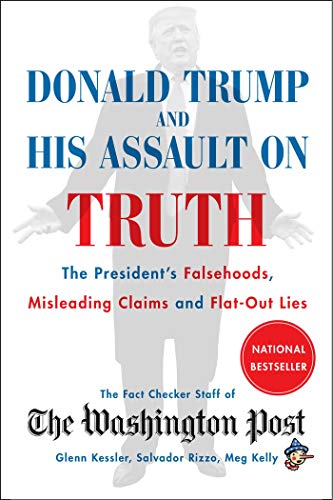 Karl Rove, a staple of Republican politics for over 20 years, is now in Trump's crosshairs. Trump had this to say about Rove recently:

Rove responded with this:

Who to believe? I'm no fan of Rove's but he's never hidden or shied away from being who he is: GOP all the way through. Those who would take Trump's word as fact here and accuse Rove of being liar would have to declare on what basis they came to this conclusion. I'm certain it would be centered on a conspiratorial notion; namely that Rove is part of the swamp. This basically allows Trump to say, literally, anything and his sycophants accept it... no questions asked.

Hardly a rigorous standard and certainly a very dangerous one in my view.
Click to expand...
Thanks. I'll need to have a look when I have free time to dig deeper.

Bart V said:
Silence provided you with a good chunk of lies to start with, since you asked me to not spend to much time at it, i will leave it at that.
To ask this question though? It brings up another one, (also being genuine) what media did you consume over the last four years if you have to ask?
Click to expand...
It's mainly based on the whole Jan 6th thing that without a doubt, was based upon Trump leading people on and then discarding them when things got real. That to me just made it crystal clear that the Trump I thought I had sussed out, didn't exist.

Bart V said:
How did you come to the conclusion that there was any doubt that someone could name three DJT lies?
Why did you wait with indulging your curiosity about his lying for all this time?
Is it maybe that you have different criteria for calling something a lie? To me it is simple, if someone makes a statement that is verifiable wrong, it is a lie.
Let us know what you think.
Click to expand...
I didn't come to a conclusion that I doubted someone could name 3 Trump lies. I wanted to know 3 verifiable lies because I currently see it as a weak point in my understanding, and I wondered if I could have been fooled, and how that occurred.
1

Member
#5,462
1-2 Steps off Monkey said:
Should point out that not everyone who Ghillane, Epstein or other sick fucks have managed to get in a photo with or somehow deceived are automatically bad. They used to throw parties and invite anyone who was felt to be of use, very often not even knowing them or even attending their own parties. Also i think a lot of the blackmailing they set up was against people who hadn't really done anything wrong, stupid probably, drunk and having sex with over 18 prostitutes again probably and stupid and very probably still too young at 18-22 but that is nothing compared to the crimes Ghillaine and Epstein are guilty of imo
Click to expand...
To highlight the above post. The CNN dude's (unsure who he is at the moment) wife pictured in the middle just seems like a silly socialite to me. Obviously there's that evil cunt Maxwell on the right but it seems there is another evil cunt on the left. Anyone know who she is?
https://nationalfile.com/cnn-presid...otographed-repeatedly-with-ghislaine-maxwell/
1

Member
#5,464
1-2 Steps off Monkey said:
To highlight the above post. The CNN dude's (unsure who he is at the moment) wife pictured in the middle just seems like a silly socialite to me. Obviously there's that evil cunt Maxwell on the right but it seems there is another evil cunt on the left. Anyone know who she is?
https://nationalfile.com/cnn-presid...otographed-repeatedly-with-ghislaine-maxwell/
Click to expand...
Yeah so anyway had seen an interview previously and then looked into it, with someone who had took as the owner of CNN or something like that and thought maybe he was this womans husband. He's not though but have looked at her husband some and seems like the same kind of category that would put Ted Turner in. An honest assessment. Not the nicest of people and would say they have a nasty side to them at times. Not the brightest either but the same would go for anyone with a relatively sizeable nasty side. They probably both do for different reasons, in Ted's case imo because he is kind of grunty where he is at in his relative lifepath evolution, but they both probably stick their fingers in their arse. One in four blokes probably does the same though these days and they are not all bad by any means, though it is an unhealthy practice for men and women both imo. Still keeping note of a nasty and out of order side to both them (Ted Turner and Jeff Zucker), they are nowhere near full on evil, pedos that type of shite imo.
1

Member
#5,465
As for CNN i think i could say (dont watch it that much especially lately) that putting the fakenews, lies, bias to democrats almost iregardlessly and mainstream agenda (often set by very evil people) coherent, CNN doesnt come across as deceitfully full on evil like the BBC or SkyNews. I did hear about a program CNN did though where their reporter went to some far off cannibal infested place and ate human flesh. This rings obvious alarm bells and makes me wonder if apart from Ted Turner, if there may be other partners, shareholders etc either officially or unofficially that have a say on what happens at CNN. Does anyone have any info on this?
1

Member
#5,466
or maybe evil people convinced CNN with some bullshit to broadcast a program like that so as to make it seem like CNN is in that category (way beyond fakenews) and diflecting peoples attention from where they should be looking (eg BBC and Skynews ownership as well as high up staff along with a few BBC reporters that have come across imo, like the shite who does Hardtalk program on BBC News24 being satanic ritual abuse cult imo, planet hellbound cunt).
1

Member
#5,467
1-2 Steps off Monkey said:
or maybe evil people convinced CNN with some bullshit to broadcast a program like that so as to make it seem like CNN is in that category (way beyond fakenews) and diflecting peoples attention from where they should be looking (eg BBC and Skynews ownership as well as high up staff along with a few BBC reporters that have come across imo, like the shite who does Hardtalk program on BBC News24 being satanic ritual abuse cult imo, planet hellbound cunt).
Click to expand...
since a new categorisation method seems to have come out of the above posts, just 'fakenews' and on the other hand 'deceitfully evil etc as well as fakenews' or something along those lines, should mention that anywhere in previous posts where have just used the label 'fakenews' or something similar, does not imply that it may not be evil as well, imo. I remember calling NBC fakenews and that i think they definately are but haven't looked into them enough to say any more. May have used just 'fakenews' elsewhere as well before now which again does not imply that they may not be evil as well, imo.
wish nice sunday and lets hope the shite keeps minimising some in this slow ass world
peace